Conditions as of November 28th

Crop condition map synthesizing information for all four AMIS crops as of November 28th. Crop conditions over the main growing areas for wheat, maize, rice, and soybean are based on a combination of national and regional crop analyst inputs along with earth observation data. Crops that are in other than favourable conditions are displayed on the map with their crop symbol.

Crop Conditions at a Glance:

Maize – In the northern hemisphere, harvesting is wrapping up with overall mixed conditions, while in India, sowing of the Rabi crop is beginning. In the southern hemisphere, sowing continues in Argentina, Brazil, and South Africa.

Soybeans – In the northern hemisphere, harvesting is wrapping up in Canada, India, and Ukraine. In the southern hemisphere, sowing is beginning in Argentina under dryness, while progressing in Brazil under favourable conditions.

Forecasts at a Glance:

Brazil – December precipitation is likely to be near average across the country. However, the long-term (three-month) forecast is for below-average rainfall across much of the central, south, southeast, and northeast regions.

In Australia, conditions are exceptional in most areas, despite ongoing flooding in parts of eastern Australia. Harvesting is well underway in northern and western cropping regions. In Argentina, yields are poor in most areas due to drought as harvesting is wrapping up in the north and beginning in the main producing areas; many plots have been used as forage. In the EU, conditions are generally favourable, albeit with delayed sowing in the southern countries due to low soil moisture levels. In the UK, conditions are favourable. In Türkiye, sowing is wrapping up under dry conditions in the west. In Ukraine, conditions are generally favourable, albeit with persistent dryness in Odessa and disruptions/security concerns in the southern and eastern regions due to the ongoing war. In the Russian Federation, sowing is wrapping up under generally favourable conditions except for dryness in the southern Caucasus. In China, winter wheat is under favourable conditions with ample soil moisture. In India, sowing is beginning in the northern and central states. In the US, dry conditions across the Great Plains from South Dakota to Texas continues to be a concern going into winter. In Canada, winter wheat sowing is complete and under favourable conditions going into winter dormancy.

In the US, harvesting is wrapping up in the north under exceptional conditions in Michigan and Wisconsin. In Canada, harvesting is wrapping up under exceptional conditions in Ontario. In Mexico, harvesting is ongoing for the spring-summer season (larger season) under favourable conditions. In the EU, harvesting is wrapping up with below-average yields across most of western and southern Europe due to droughts and heatwaves. In Ukraine, harvesting slowly continues with just over half the crop collected so far, so many crops will likely be harvested during the winter or early spring. In India, sowing of the Rabi crop is beginning under favourable conditions. In Brazil, sowing of the spring-planted crop (smaller) is continuing under favourable conditions with a slight reduction in the total sown area expected compared to last year. In Argentina, sowing of the early-planted crop (typically larger season) continues at a slow pace due to dryness. Recent rains have improved conditions in some areas, but much of the intended sown area will likely shift to the later-planted crop (typically smaller season) in hopes of better soil moisture conditions. In South Africa, ample rainfall since mid-October has supported sowing and early development.

The El Niño-Southern Oscillation (ENSO) is currently in the La Niña phase. La Niña conditions will likely continue into early 2023 (76% chance for December to February and 59% chance for January to March), according to the IRI/CPC. Neutral ENSO conditions are likely after that. 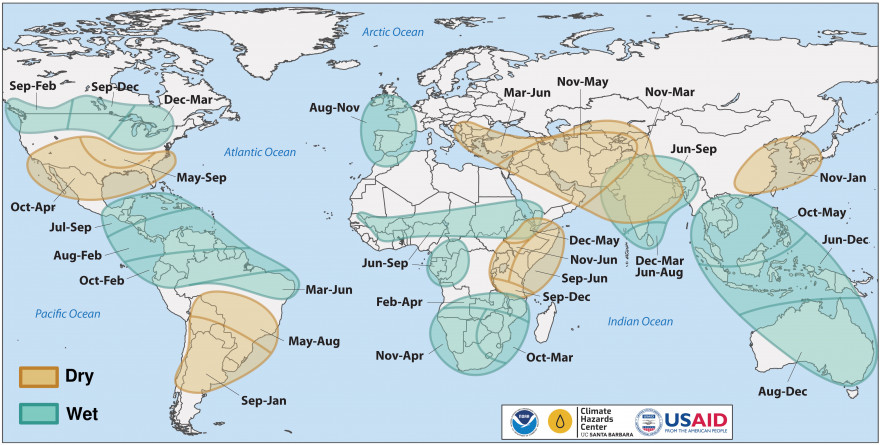 The long-term December-January-February 2022/2023 forecast (right) shows likely below-average precipitation across much of the main agricultural areas except for western Buenos Aires, and La Pampa. During the same period, temperatures are likely to be above-average across Cordoba, Santa Fe, Entre Rios, San Luis, La Pampa, and Buenos Aires.

The long-term November-December-January 2022/2023 forecast (right) indicates likely below-average precipitation across Tocantins, Goias, Bahi, Minas Gerais, Espirito Santo, Rio de Janeiro, southwest Mato Grosso do Sul, western Santa Catarina, and Rio Grande do Sul. During the same period, temperatures are likely to be slightly above-average across the eastern parts of the country and slightly below-average across the northwest portion of the country.

The December 11-15th outlook indicates there is the possibility of above-average precipitation across most of the continental US, with the highest likelihood in the southern Great Lakes region and the southern Pacific Northwest. There is possible below-average precipitation in western Texas and southeastern New Mexico. During the same time, temperatures are likely to be above-average across the eastern US, while below average across the western US.

For the longer-term seasonal December-January-February (DJF) 2022-2023 outlook, below-average precipitation is possible across the entire southern part of the country and reaching up into the Central Great Plains. Conversely, above-average precipitation is likely in the Pacific Northwest and the Great Lakes region. During the same period, temperatures are likely to be above-average in the southeast and extend across the southern US and the entire East Coast. Temperatures are also likely to be below-average across the northern Great Plains across to the Pacific Northwest.

Pie chart description: Each slice represents a country’s share of total AMIS production (5-year average). Main producing countries (representing 95 percent of production) are shown individually, with the remaining 5 percent grouped into the “Other AMIS Countries” category. The proportion within each national slice is coloured according to the crop conditions within a specific growing area; grey indicates that the respective area is out of season. Sections within each slide are weighted by the sub-national production statistics (5-year average) of the respective country. The section within each national slice also accounts for multiple cropping seasons (i.e. spring and winter wheat). When conditions are other than’ favourable’, icons are added that provide information on the key climatic drivers affecting conditions.