Conditions as of June 28th 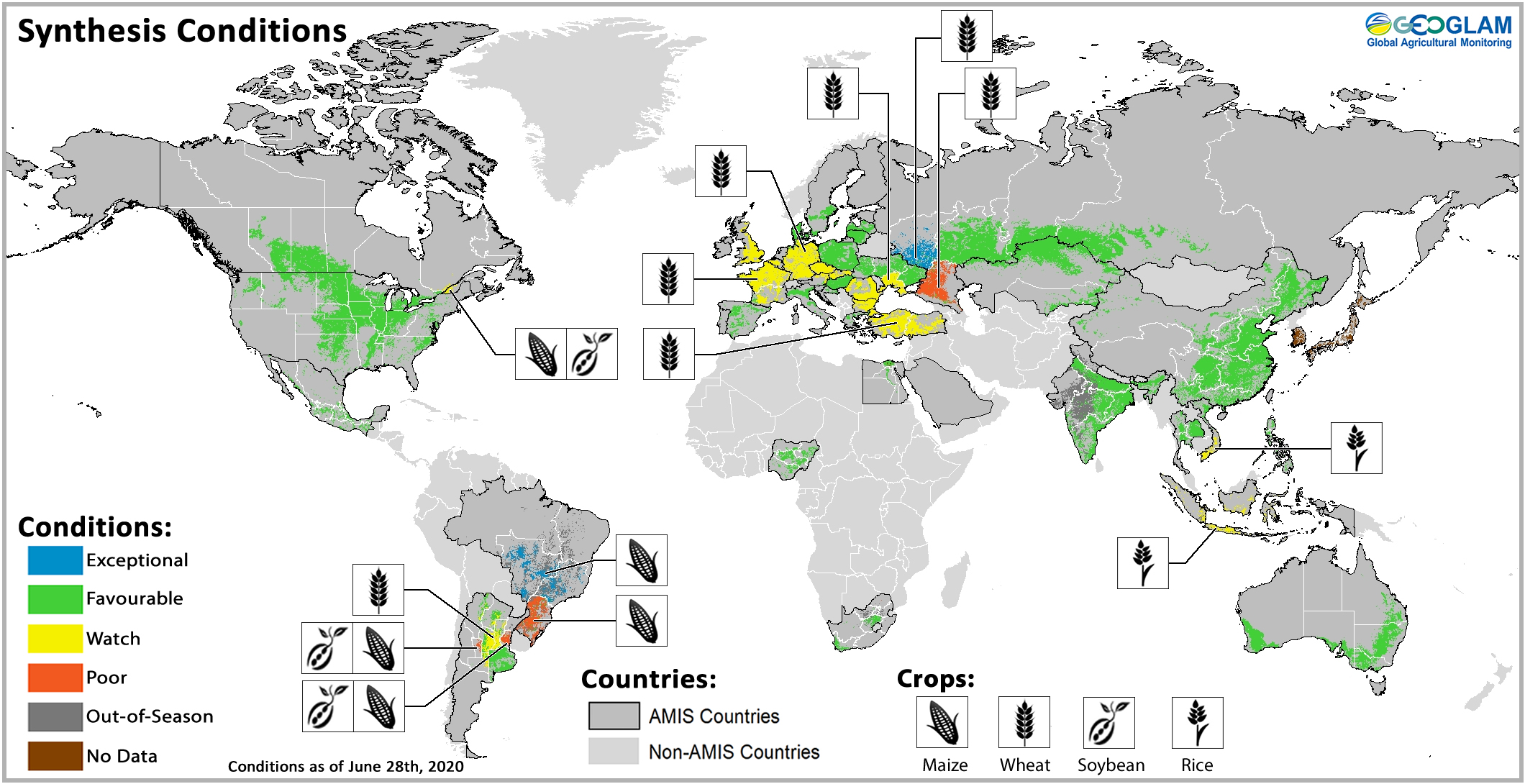 Crop condition map synthesizing information for all four AMIS crops as of May 28th. Crop conditions over the main growing areas for wheat, maize, rice, and soybean are based on a combination of national and regional crop analyst inputs along with earth observation data. Crops that are in other than favourable conditions are displayed on the map with their crop symbol.

Crop Conditions at a Glance:

Maize – In the southern hemisphere, harvest is wrapping up in Argentina and advancing in Brazil. In the northern hemisphere, conditions are generally favourable with recent improvements in Europe.

Forecasts at a Glance:

India – For the July to September (JAS) season, rainfall is most likely to be normal, however the northeast region is likely to get less rainfall than the rest of India.

Southeast Asia – There is a likelihood of average to above-average rainfall over much of the region, including previously dry areas of Thailand, Laos, Vietnam and the Philippines. 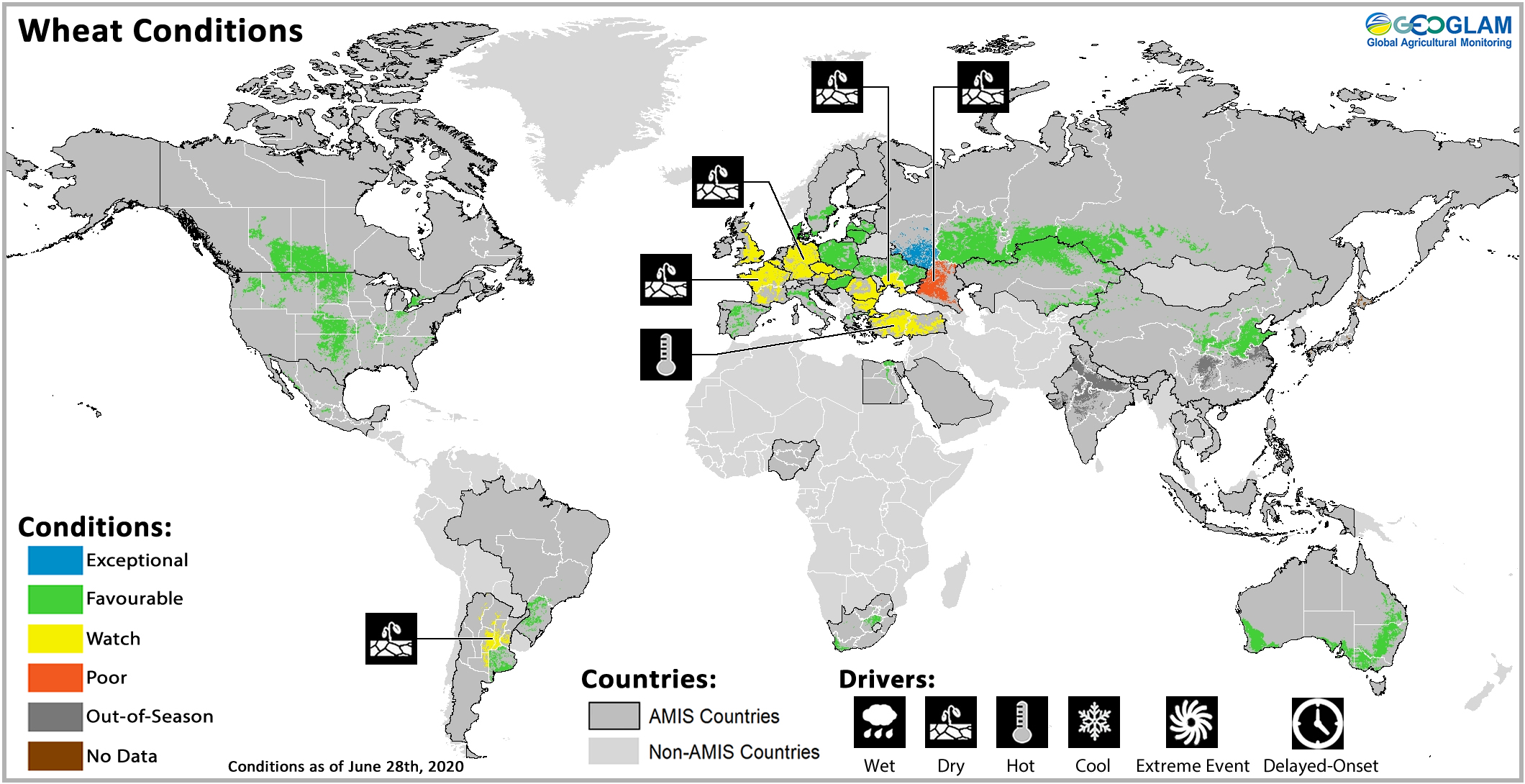 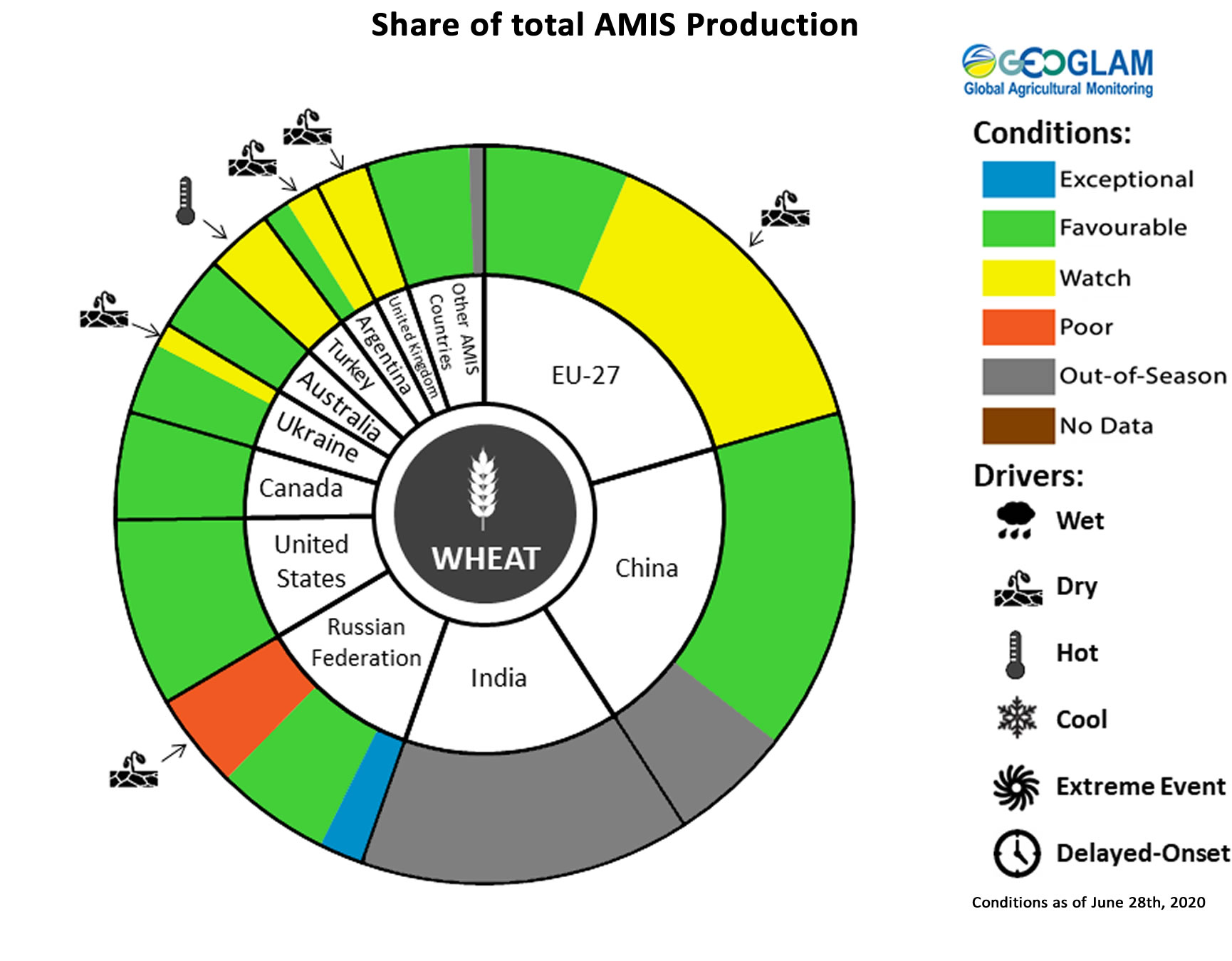 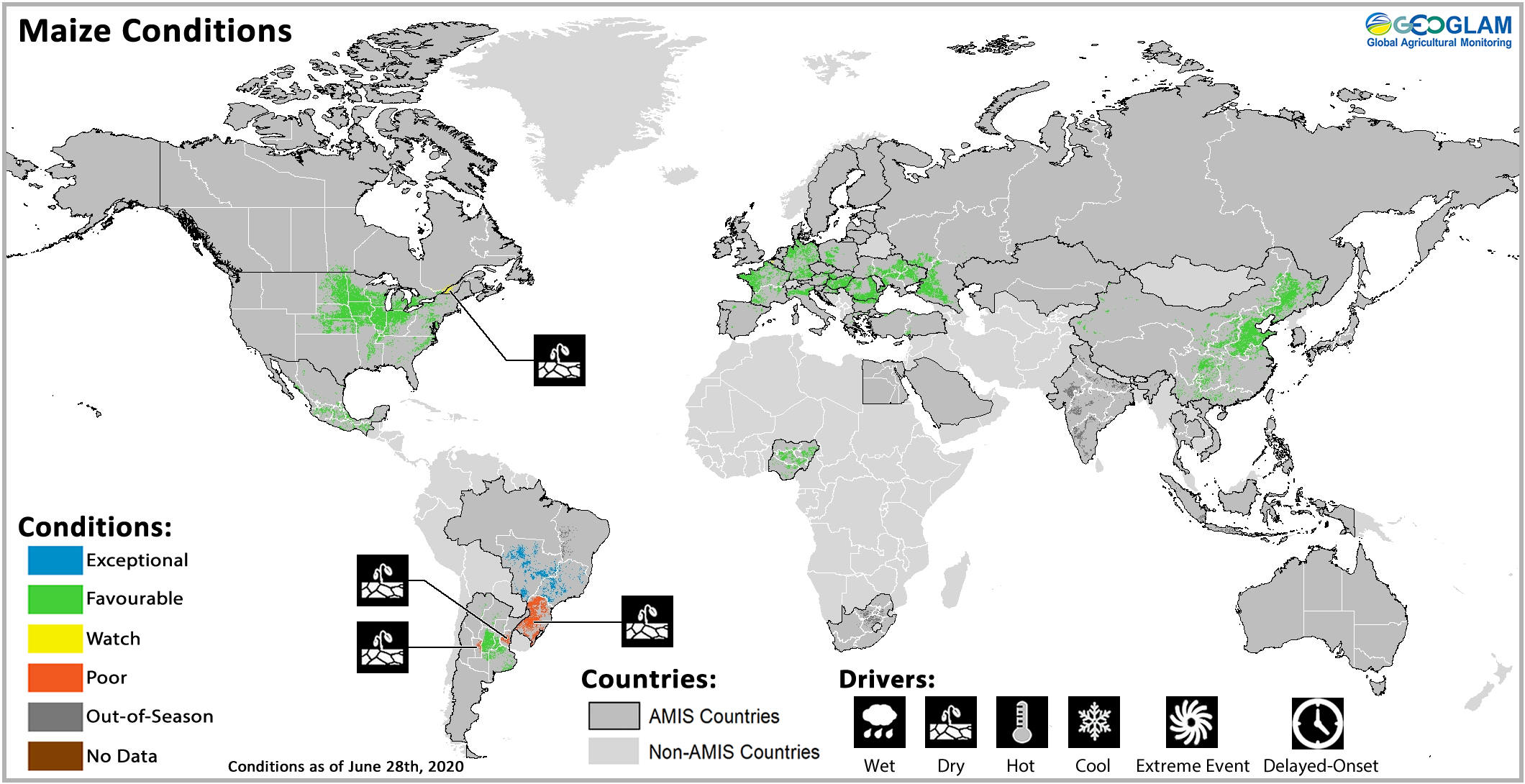 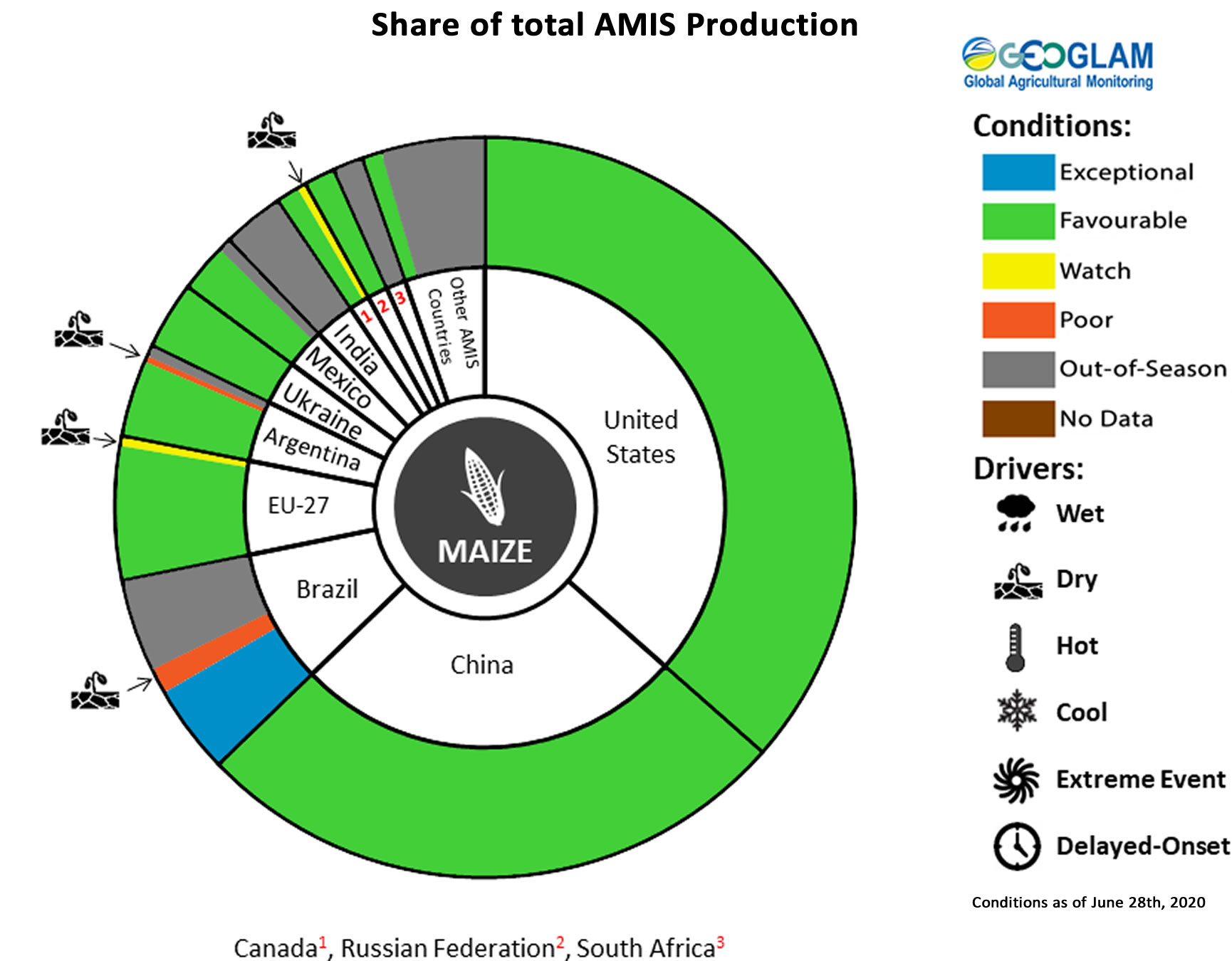 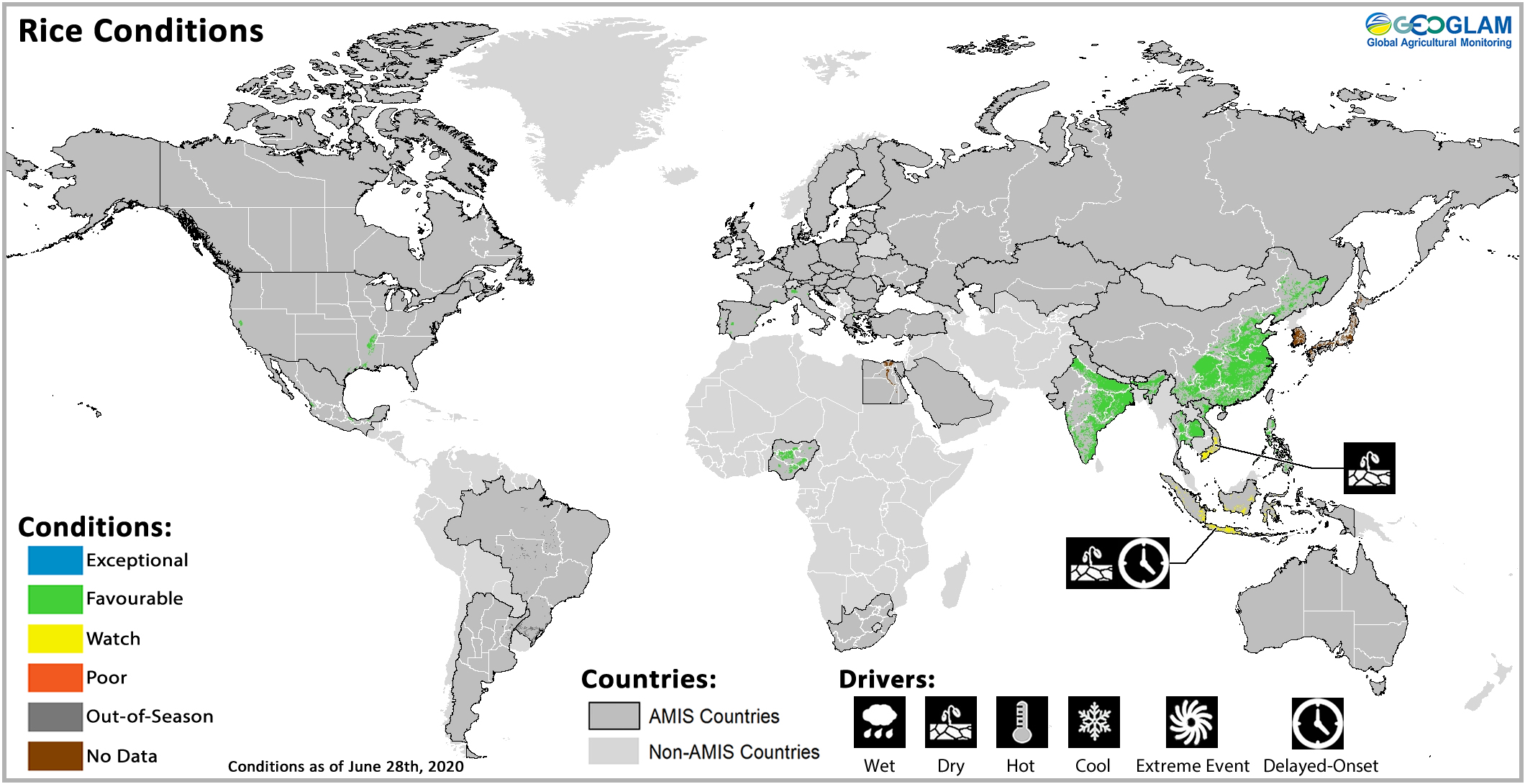 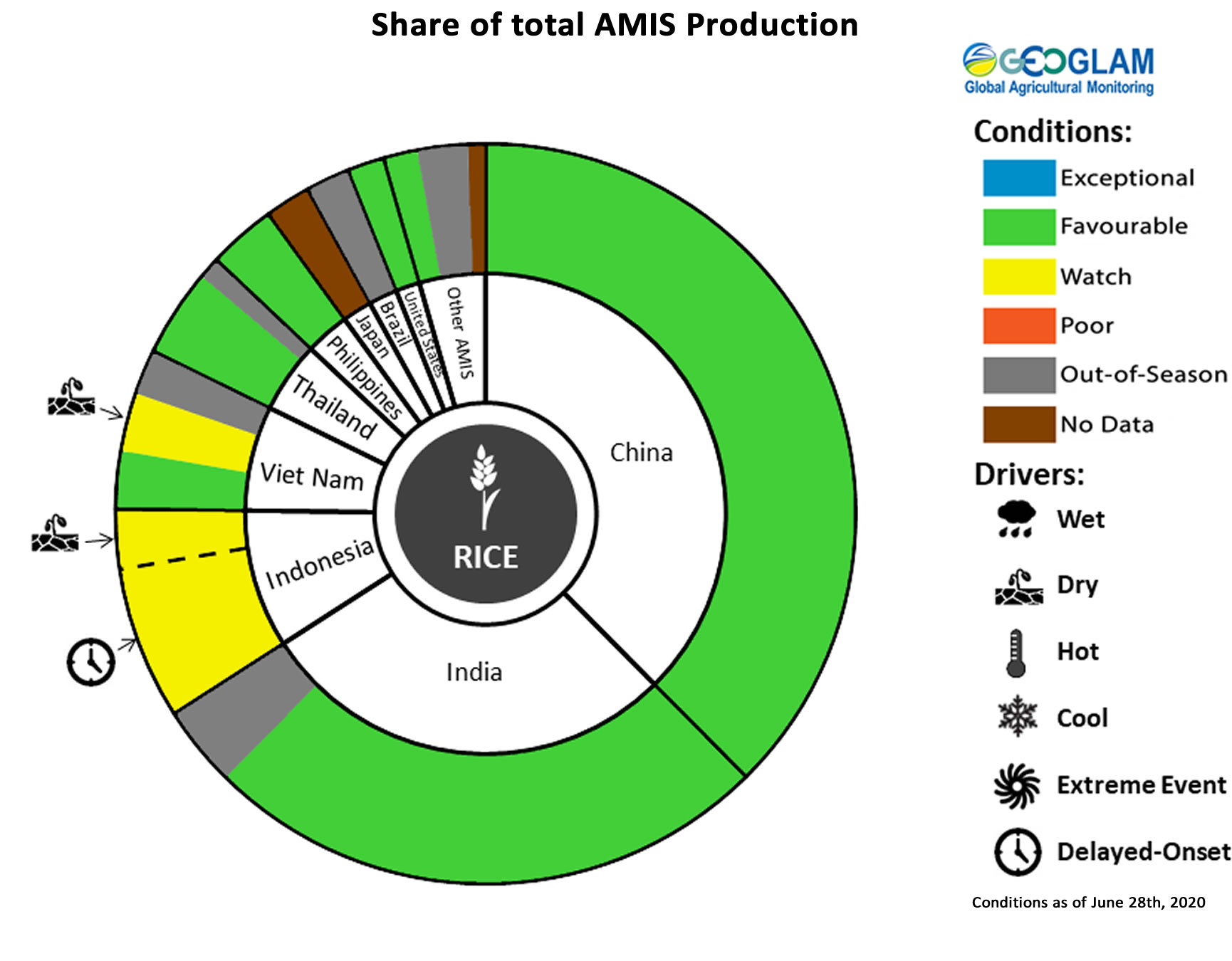 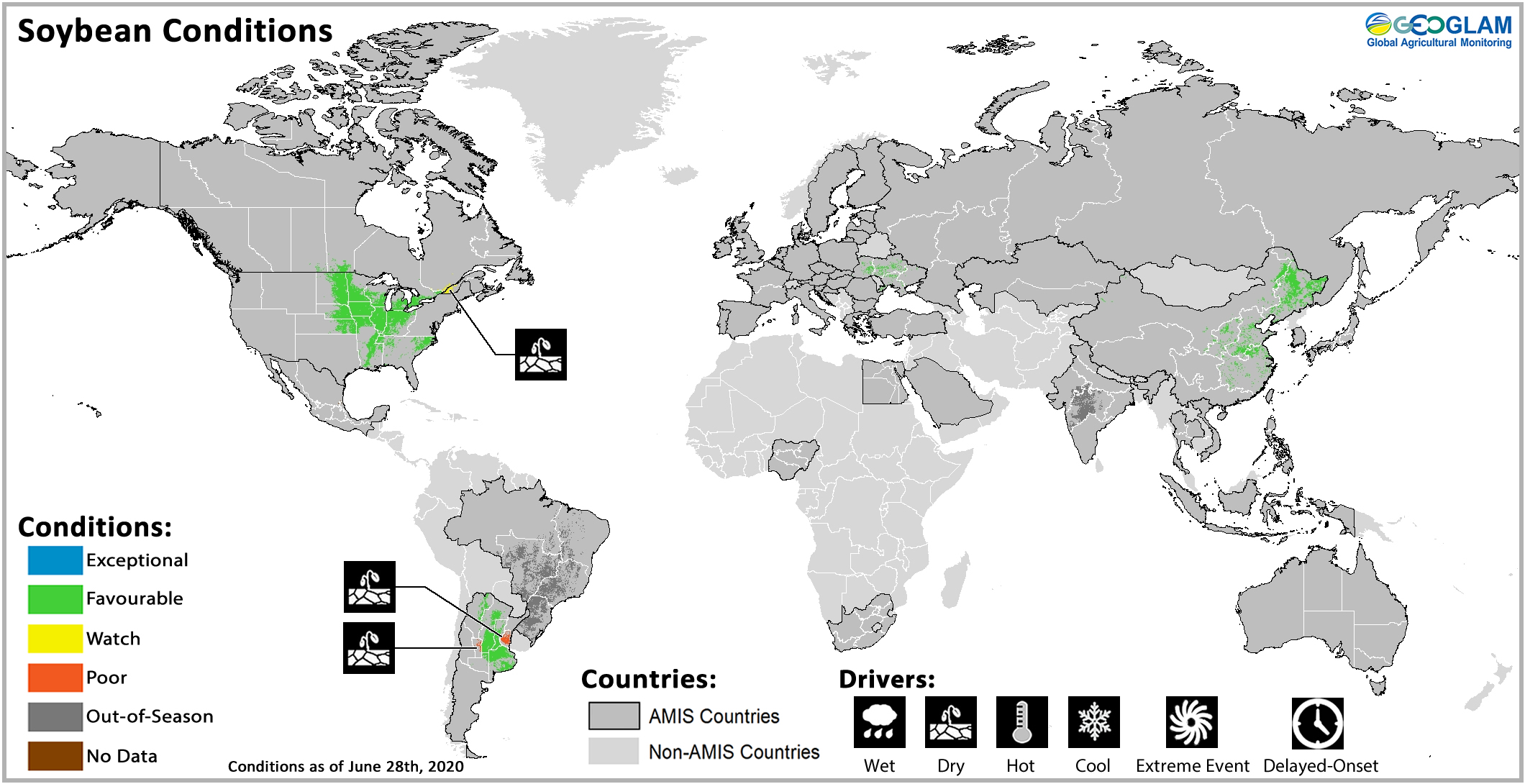 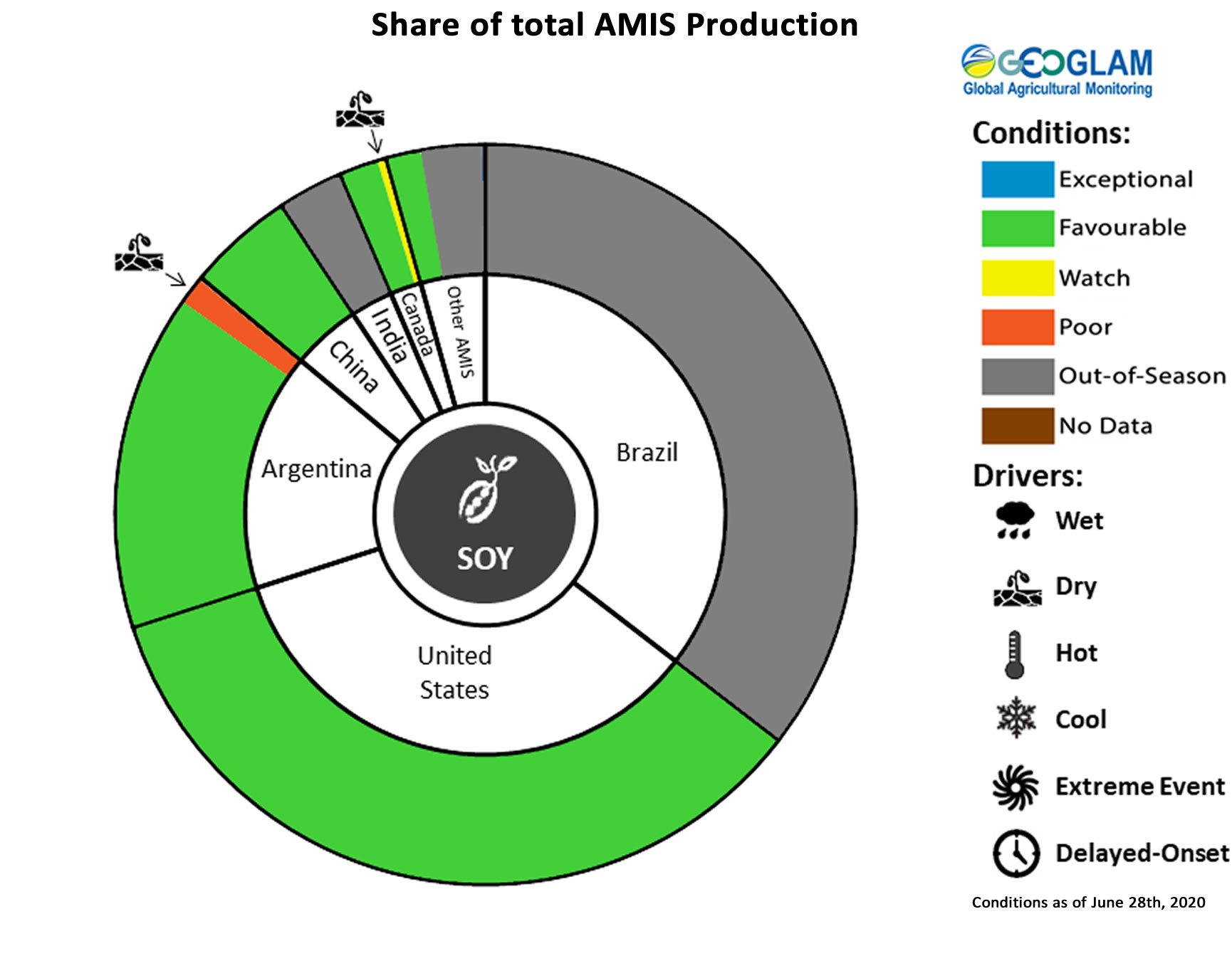 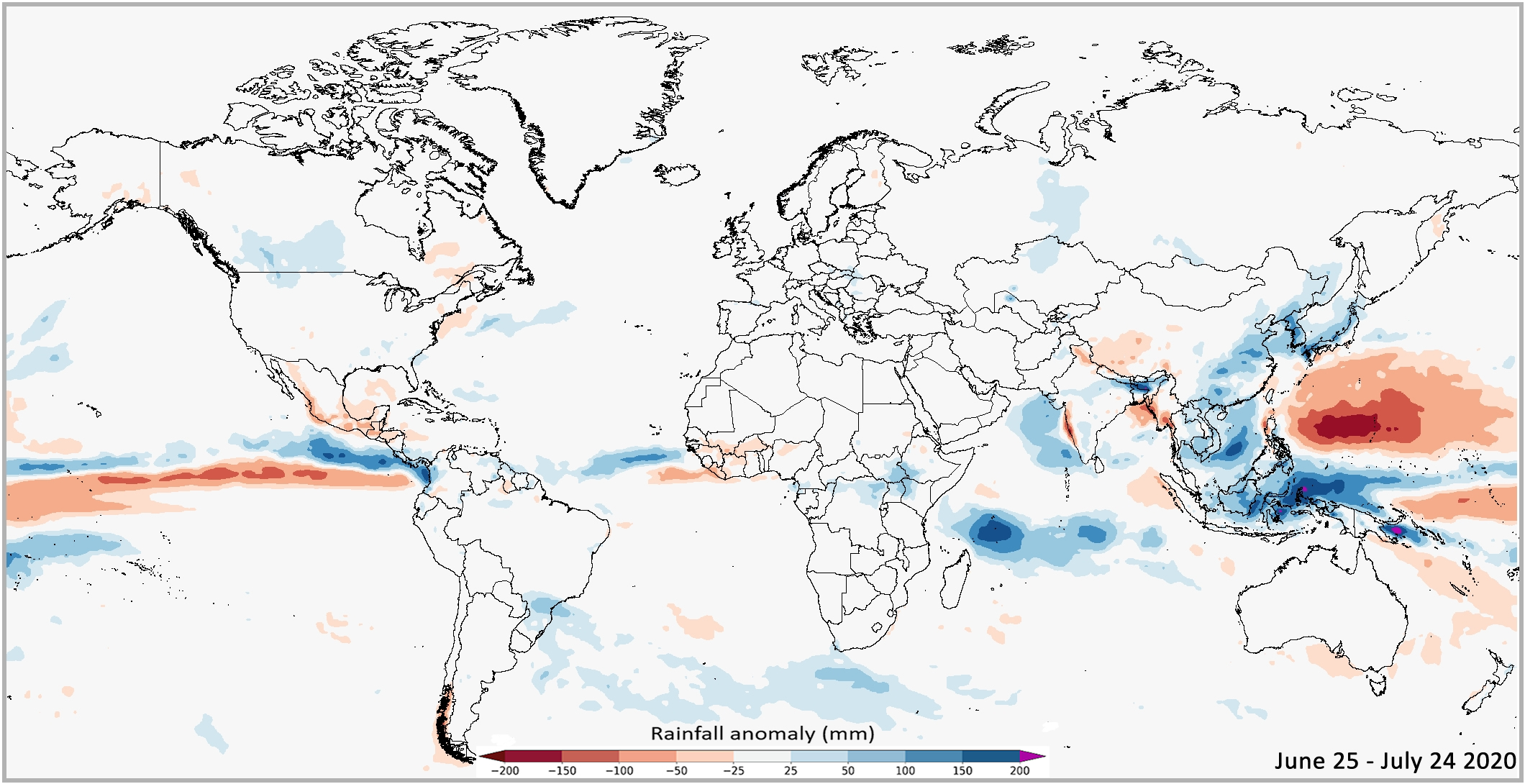 Multimodel mean subseasonal forecast of global rainfall anomaly for June 25 – July 24, 2020, showing areas of above or below-average rainfall. The image shows the average of five Subseasonal Experiment (SubX) forecasts ensemble as of June 25th. The anomaly is based on the 1999 to 2016 model average. Skill assessments of SubX can be accessed at the NMME SubX project. Source: UCSB Climate Hazards Center

El Niño-Southern Oscillation (ENSO) is currently neutral, though in the past few weeks the equatorial eastern Pacific has cooled substantially, moving towards a La Niña-like climate. ENSO-neutral conditions are most likely (~60%) to remain during the Northern Hemisphere summer 2020, with roughly equal chances (~40-50%) of La Niña or ENSO-neutral during the autumn and winter 2020-21. Precipitation, however, tends to respond to east-west tropical sea surface temperature gradient, and the world can experience La Niña-like precipitation anomalies, even in the absence of a well-developed La Niña. At present, the equatorial west Pacific temperature is substantially above normal and the equatorial east Pacific temperature is below normal, and the climate forecast for October-November-December anticipates an intensification of this gradient. A La Niña-like tropical Pacific precipitation pattern is currently predicted with enhanced rainfall over Indonesia and the Philippines. The persistence of such conditions into the autumn and winter 2020-21 could bring dry conditions over parts of East Africa and southwest Asia.

For the longer July-August-September (JAS) 2020 period, temperatures are likely to be above-average across most of the US except for some areas within the central Mississippi Valley, where there are equal chances of below, near, and above-average temperatures. Below-average precipitation is likely for much of the Pacific Northwest along with the northwest and central west Great Plains. However, above-average precipitation is likely for the eastern Great Plains and delta region continuing eastward to the Mid-Atlantic and Southeast regions.

According to the latest Quarterly Climate Report published by the National Meteorological Service, below-normal rainfall is expected for the period June-August 2020 in the main wheat-producing area (provinces of Buenos Aires, Córdoba, Entre Ríos and La Pampa) and normal values for the north of the country. Temperatures would be normal for the period considered or slightly higher.

More specifically, and considering the normal ranges for each region, in the provinces of Buenos Aires and Entre Ríos there is up to a 50% probability of receiving between 100 and 150 mm of rain. With similar chances, the provinces of Santa Fe, Chaco, East of Córdoba and La Pampa would receive between 50 and 100 mm. Finally, for the northwestern provinces and western of Córdoba, an estimated 45% chance of receiving between 50 and 100 mm in the June-August 2020 period is estimated. 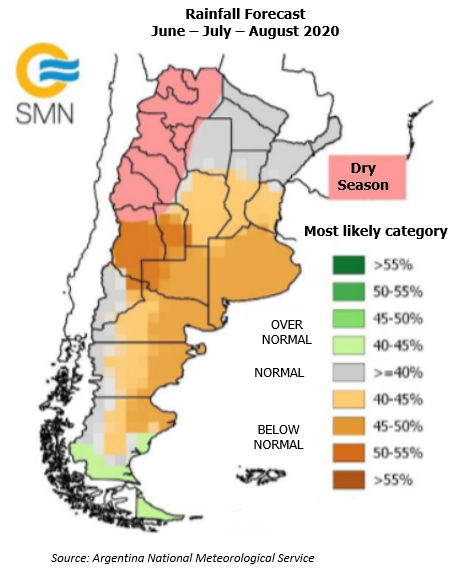 For the next seven days (07/02/20 to 07/08/20), forecast maintains a pattern of rains of low-intensity rains in the provinces of La Pampa, Buenos Aires, Entre Ríos. On the other hand, the forecast reflects a normal situation during the beginning of winter in Argentina and that is why there are no anomalies concerning the forecast of rains for the period described. 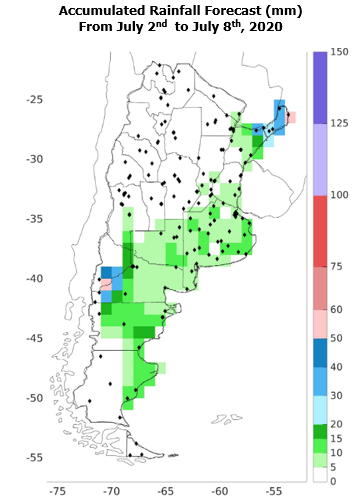 The observed rainfall for the period 1st June to 30th June was well above-average over most parts of central Indian and was below-average over some parts over North India as shown in figure 1 (left). The experimental Multi-Model Ensemble (MME) seasonal forecast for July to September 2020 for Indian (figure 1-right) suggests that relatively high probability for above-average rainfall is likely over some areas of Northwest Indian and some areas of Peninsular Indian. Below-average rainfall is likely over some areas over Northeast India. 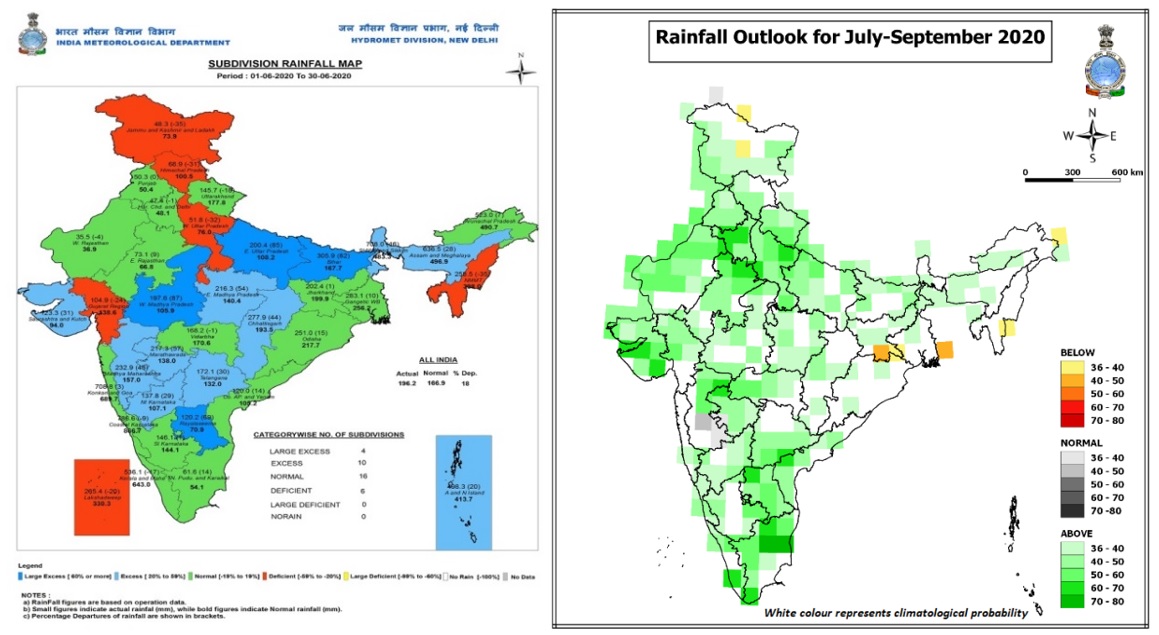 Figure 1: Rainfall Observed 1st to 30th June 2020 over the Indian region expressed in departure from LPA (period 1961 to 2010) (left) and Three-month experimental MME forecast for July to September 2020 based on June initial conditions. The forecast probability is calculated as the percentage of 7 climate models (NCEP CFSv2, GFDL FLORa04, GFDL FLORa06, GFDL FLORb01, NASA GOES05, ECMWF, and JMA) average ensemble members that fall in a given tercile (above/below/normal).

Rainfall in late May and early to mid-June was well below average across much of northern Southeast Asia, with the exception of central Thailand, western Cambodia, and southwest Vietnam where rainfall improved in June. Overall, the December to May season recorded less than 80% of the historical average in Myanmar, Thailand, southern Cambodia, southern Vietnam, northern Malaysia, and the Philippines impacting dry-season rice crops. In contrast, above-average rainfall since April in the southern half of the region (particularly across Indonesia and the southern Philippines) provided favorable conditions for the start of dry-season planting. 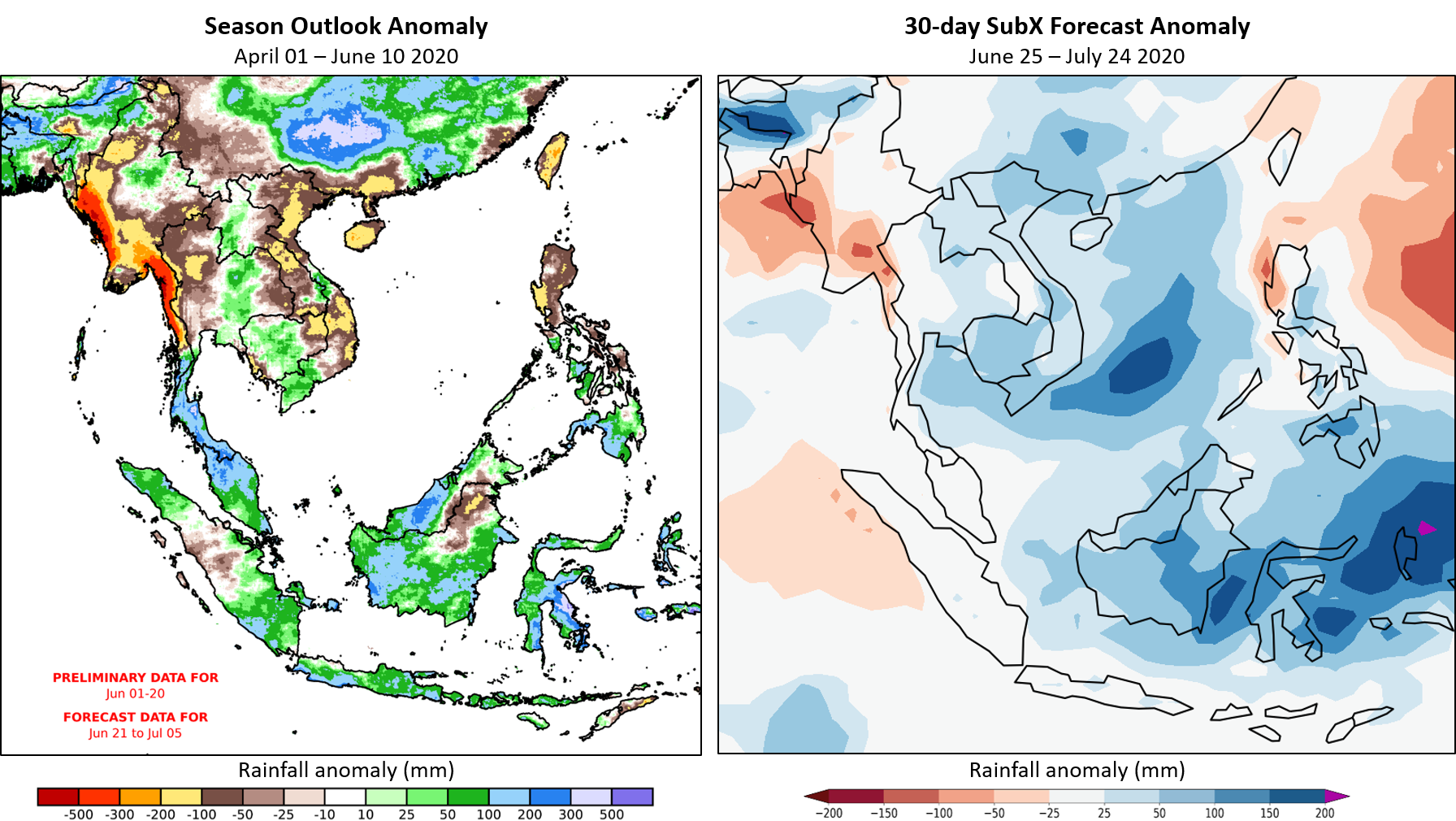 The spatial distribution of below-average rainfall in the north, and above-average rainfall in the south, is expected to continue for the next two weeks, contributing to the April-to-present seasonal rainfall anomalies seen in Figure 1-left. Rainfall totals are expected to be 120-150% of average across Indonesia, and less than 80% of average in Myanmar, Thailand, Laos, Vietnam, and the northern Philippines. However, the 30-day forecast indicates a likelihood of average to above-average rainfall over much of the region, including previously dry areas of Thailand, Laos, Vietnam and the Philippines, with the exception of in Myanmar, where rainfall deficits are expected to worsen (Figure 1-right).

Figure 1. Estimated and forecast rainfall since April 1st and a 30-day forecast. The left panel is the UCSB Climate Hazards Center Early Estimate extended seasonal outlook. It shows how the post-April 1st anomaly will change if the 15-day unbiased GEFS forecast from June 21st materializes. It compares 2020 rainfall amounts to the 1981-2019 CHIRPS average. The right panel is a 30-day forecast from June 25th. The image shows the average of five Subseasonal Experiment (SubX) forecasts ensemble as of June 25th. The anomaly is based on the 1999 to 2016 model average. Skill assessments of SubX can be accessed at http://cola.gmu.edu/kpegion/subx/index.html.

Pie chart description: Each slice represents a country’s share of total AMIS production (5-year average). Main producing countries (representing 95 percent of production) are shown individually, with the remaining 5 percent grouped into the “Other AMIS Countries” category. The proportion within each national slice is coloured according to the crop conditions within a specific growing area; grey indicates that the respective area is out of season. Sections within each slide are weighted by the sub-national production statistics (5-year average) of the respective country. The section within each national slice also accounts for multiple cropping seasons (i.e. spring and winter wheat). When conditions are other than’ favourable’, icons are added that provide information on the key climatic drivers affecting conditions.